Fifteen Minutes at a Time

7 November 2015 — The author describes the value of fifteen minutes, and describes several tasks that he's found fit neatly into buckets of that size and shape — 5-minute read 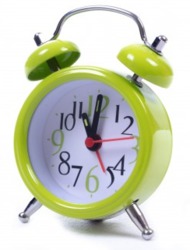 Here’s something I’ve learned: I can fit a surprising amount of work into fifteen minutes.

What is more, I can fit a surprising number of fifteen-minute blocks into any given day.

Combining those two realizations, I’ve found that I can stop complaining to myself about all the things I wish I had time for, and just start doing some of them.

This, in spite of the fact that I’m busier now than I’ve ever been. My wife is a full-time student at USU, studying music therapy, which means my daily responsibilities include not just working to support our family, but also doing a lot of the cooking and housework, as well as overseeing the homeschooling of our four children. (This is not a path I would ever have seen my life taking, and I’m not going to lie: it’s been hard. But it’s also been amazing.)

Still, I’m realizing that I’m almost never so busy that I can’t afford to take a few fifteen-minute breaks here and there, and I’ve been amazed at what I can fit into them:

The list could go on, but you get the idea. Sometimes, I really am too busy to fit fifteen minutes in, but that’s rare. I’ll usually have to sacrifice something to get the time I need (sorry, Kerbal Space Program–I’ll finish that base on Eeloo someday!), but I can almost always find it somehow. 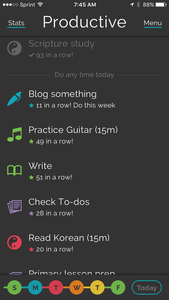 Lastly, a plug for an iOS app that has been amazingly helpful for keeping track of all the stuff I want to do: Productive. Instead of trying to arrange things out in a strict calendar or day planner, it simply lets me list the tasks, and specify roughly when I want to do them. (Daily? Weekly? Afternoons? Mornings? Weekends?) Then, every time I finish something, I check it off. The app automatically brings it back again the next time it is due. It encourages me to not break the chain by showing how many days in a row I’ve finished each task. And it does all this without making me feel like I have to endure the tyranny of a minute-by-minute schedule. Very motivating.

So, how many fifteen-minute chunks can you spare? How much more can you accomplish? Take a close look and see what you find.

(Ironically, this post took a lot more than fifteen minutes to write. You just gotta pick your battles, I guess.)