Variations on a Theme: "I Becomes We..."

I was in Oregon last week, staying with my aunt and uncle, and on the way to their place I passed a church with a sign that read:

Now, normally I really like pithy little sayings like that. I love playing with language, and discovering insights (intentional or otherwise) that come from changing the way we look at words and meanings.

This one just annoyed me, though. The more I thought about it, the more it irked me. It was trying to be pithy and meaningful, but it fell short of the mark. It just didn’t work for me.

But I wondered if I could find some that worked better. It seemed like it would be a simple matter of parsing a dictionary file, replacing substrings in each word and seeing which ones resulted in real words.

The script was easy enough to write. I started simple, working with the original “I becomes we” theme:

Then I experimented a bit with puns:

And with changing cases:

Those weren’t quite going where I wanted (except for the “it becomes wet” one, which I actually kind of liked.)

So I started casting about for other small words that could be swapped:

That one almost crossed the threshold of pithiness, but the “a” versus “the” thing was too tenuous. I started wondering if I could play with the sentence itself, where “becomes” could be understood more than one way.

Better… this was moving in the right direction. I next tried waxing proverbial, and experimented with other structures, moving away from “becomes”:

That “says” form inspired me especially:

Well all was said and done, though, my favorite one used the original “becomes” form: 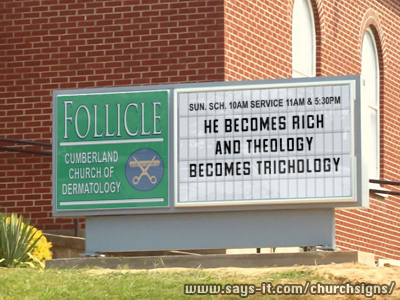 I really hope someone puts that on a real church billboard somewhere.

The script for searching the dictionary for a particular pairing was pretty trivial, but if you’d like to play with it, I’ve posted it as a gist. If you find some good pairings, let me know!