Fractals have been a long-standing interest of mine. I can remember playing with Fractint for long hours at a time, zooming deeper and deeper into the Mandelbrot set. Fractint was also what introduced me to Lindenmayer systems (or L-systems), a method of constructing fractals by recursively rewriting a statement according to some grammar, to form more and more complex statements.

This week, let’s play with these L-systems a bit! But first, a recap of week #13…

For the 13th weekly programming challenge, we dabbled with Poisson disc samples, constructing a sampling using Bridson’s algorithm. I had a lot of fun with this one!

Only one submission this week, but I know a few others worked on it, at least. Great work, Lasse Ebert, on his normal mode submission! He implemented Bridson’s algorithm in Elixr, and generated the output using his image library from week #4. Check out his implementation here: https://github.com/lasseebert/jamis_challenge/tree/master/013_bridson.

I went…a bit overboard on mine this week. Making up for previous weeks, maybe? I implemented Bridson’s algorithm, and then implemented the Bowyer-Watson algorithm](https://en.wikipedia.org/wiki/Bowyer%E2%80%93Watson_algorithm) to generate a Delaunay triangulation from those points. Then, with that triangulation, I converted it to it’s dual graph: a Voronoi diagram. My favorite part was taking the Mona Lisa and creating a “stained glass” effect, by sampling it and converting the samples to Voronoi polygons, like so: 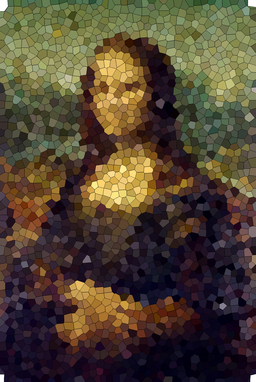 Like I said, a bit overboard. But it was fun!

So, L-systems! The basic idea behind L-systems it that you start with some statement, and then using some given set of rules, you repeatedly rewrite that statement by substituting phrases for symbols in the statement.

Let’s say we start with this statement: FX.

So, given FX, the first time we rewrite, the X gets replaced, and we’re left with FX+YF+.

The second time, we replace both the X, and the Y, resulting in FX+YF++-FX-YF+.

And so forth. That’s it, really. That’s an L-system.

So what’s the big deal? Well, it gets interesting when you assign meaning to the different symbols. For instance, suppose we hook this up to some simple turtle graphics system. Let’s let F mean “move forward 1 unit”, let + mean “turn right 90 degrees”, and let - mean “turn left 90 degrees”. If we repeat the above substitution 17 times, and then draw the result, we wind up with this: 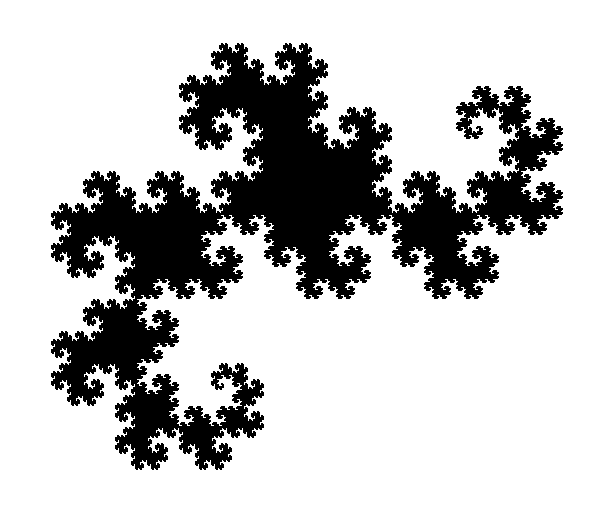 For more examples, and a deeper explanation of how the grammars can work, check out Wikipedia.

For normal mode (and one point), here’s all you’ve got to do:

That’s it! You’re going to have to tackle some math to make this work, and figuring out how large your canvas needs to be may be a bit of a puzzle, but it can be done! Try the dragon curve (above) as a test.

For hard mode, you should be ready to stretch yourself a bit. Each of these will add one point to your score.

Feel free to shoot for “surprise me” mode, too! It doesn’t have to be any harder than normal mode, but it ought to implement the challenge (either normal mode or hard mode) in some surprising, clever, or otherwise delightful way. See what you can come up with!

The deadline for this challenge has passed, but feel free to try your hand at it anyway! Go ahead and submit a link to your solution in the comments, anytime. If you’re following along, the next week’s challenge is “Turtle Graphics”. See you there!