Implementing a Bloom Effect with Swift+Metal

27 February 2016 — A short walk-through is given, demonstrating how to apply a "bloom" effect using Apple's Metal framework — 7-minute read

I’ve been learning a lot about Apple’s Metal framework recently, as I’ve been working through building a game based on navigating mazes on non-planar surfaces (cylinders, mobius strips, etc.). It’s been a lot of fun, but it’s also been pretty frustrating. Metal is still pretty new, so it can be a challenge to find answers when you get stuck. You typically wind up translating from OpenGL to Metal…which can be tricky if you’ve never actually learned OpenGL.

Recently, I wanted to implement a bloom or glow effect, like the following image: 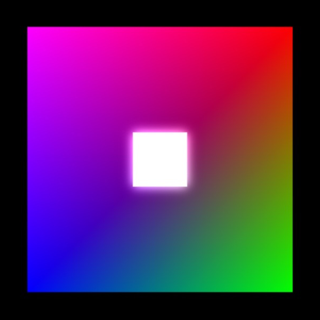 The white square is slightly in front of the rainbow square, and has a bloom effect applied to it, making it seem to glow slightly.

Of course, there were plenty of resources describing how to do it in OpenGL, but nothing in Metal, and the vocabulary used by Metal and OpenGL don’t always overlap. After much trial and error, I managed to get it to work, and it works pretty well. Today I’m going to describe how I did it, for two reasons:

Note that this is not a complete tutorial; I’m not going to show you how to set up Metal, or prepare buffers or textures, or any of that. There are some really great tutorials on those points elsewhere. I’m going to assume that you already have some experience with Metal, and instead I’m going to focus on these points:

It is no coincidence that these points correspond to the different steps of creating a bloom effect:

The Metal layer is the bit that actually displays what we’re rendering. Most tutorials will recommend setting the layer’s framebufferOnly attribute to true, for performance reasons, but if you’re going to be doing post-processing on the frame buffer, you have to set it to false. The good news is that performance wasn’t significantly impacted (for my use case). Your mileage may vary, of course.

This wasn’t clear to me at first, but each color attachment that you configure corresponds to a frame buffer (or “texture” in Metal parlance).

Once those have been configured on the pipeline state, you also need to set up the color attachments on the render pass descriptor. (I’m assuming you’ve already prepared a separate texture that matches the dimensions and pixel format of the layer itself.)

That’s all it takes to set up multiple frame buffers. Next, we’ll look at how to write to those frame buffers from a single fragment shader.

The key to writing to multiple frame buffers, is telling the shader which attributes of the fragment output correspond to which color attachments. You do this with the color(n) annotation. Below is the relevant bit of a simple fragment shader that just passes the color straight through. VertexOut is the output of the vertex shader, and the mask property is used to indicate whether the fragment should be “bloomed” or not (that is, whether it should be written to the mask texture or not). 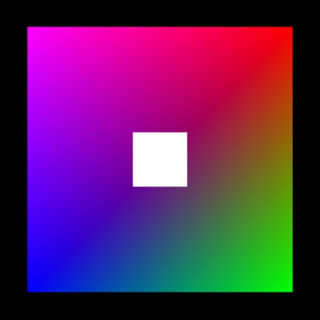 And our mask image contains just the white square in the middle: 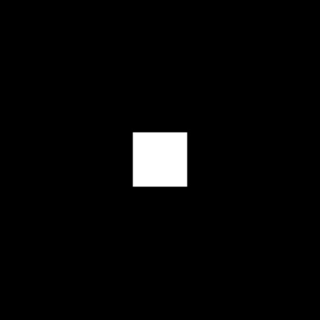 Next, let’s blur that white square a bit.

Apple’s “Metal Performance Shaders” framework includes implementations of several different convolutions, including a Gaussian blur. Metal makes it really easy to chain multiple effects together in a single command queue, so we can do our render, and then apply the blur to that masking texture. 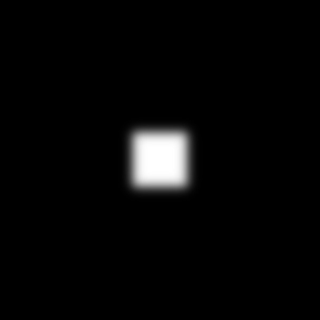 There may be a better way to do this (I kind of expected Metal Performance Shaders to include a way to do composition, but it doesn’t…), but here’s how I made it work. I set up a compute shader that runs over the textures in parallel, computes the new value of each pixel, writes it to the output texture.

The gid parameter represents the position within the texture that we’re writing to. Each compute shader is configured to work over a 1-, 2-, or 3-dimensional grid, with threads running in “thread groups”. I’m, um, not going to explain all of that (since, I’ll admit, I’m not super confident in my own understanding of it all).

To take advantage of this, we need to create a compute pipeline state that wraps the shader function:

Then, while setting up the render itself, we’ll queue up a compute command just after the Gaussian blur kernel:

And then we wrap it all up by presenting the drawable, and commiting the command buffer:

And that’s it! The resulting image has the white square glowing neatly in the middle:

It’s really not that hard to do, once you understand the concepts involved:

Go forth, and bloom!